Easing the way back 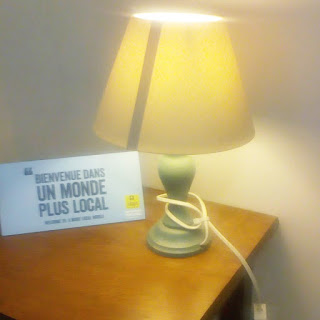 Returning home from the French holiday villa in Creissan (22 miles north of the Mediterranean coast) is inevitably a burden. The distance, joyfully accepted a fortnight before, now seems formidable. Creissan to Calais is 660 miles (10 hr 12 min), then there's the Channel Tunnel crossing (say 1 hr 30 min with the queueing), then a further 210 miles (4 hr 10 min) between Folkestone and Hereford. Some 16 hr all told; it takes two days.

We've been doing it for over a decade and are now experts. The key lies in where to break the French part of the journey. For several years we've settled on Forges-les-Eaux, north-west of Paris. As the kilometres unreel we dream of the wine list at the Hotel la Paix.

This is where satnav comes into its own. After years of experimentation the optimum route takes us far closer to Paris than we first thought. Look at the geography. You'd like to weave your way through all those suburbs aided only by an atlas? Masochism can be your only justification. Satnavs mislead you, you say. So do atlases in a country where new roads are added every year. Treat the satnav as a tool not a crystal ball. Dominate it. We tested a small variation while in transit. It worked.

The bill for three at the Hotel la Paix was huge but then we sought catharsis. Achieved this year via a bottle of Latour's Vosne Romanée, followed by a snifter of old armagnac (VR never changes) and two doses of mature calvados for Occasional Speeder and me.

The hotel is beautifully maintained. Note the photo - the flex of the bedside light seems unnecessarily tangled. No! The switch becomes more accessible to the weary traveller. There’s a little treat.
at July 31, 2019 5 comments: 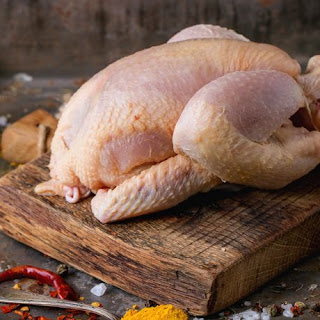 Dialogue (in French) at Intermarché

RR: There are no toilets in this supermarket? (NOTE: In France it's more chic to phrase questions as statements on a rising cadence than reversing verb and pronoun as we were all taught at school.)

Svelte Young Lady in Customer Service: There are none, Monsieur

SYLICS: The building is too small.

RR: But some of your customers may feel the need...

SYLICS: It is simply a matter of floor area. (NOTE: For floor area she employs the French word superficie. I recognise its meaning and am ravished)

RR: A French thing, then?

SYLICS: Indeed.
------
Days later we (RR, daughters Professional Bleeder and Occasional Speeder) are hunting down a near relation of Poulet de Bresse (see pic) for which I am expecting to pay up to £25. The hunt is complicated by the fact that two of us are also suffering from that very special personal need alluded to above. Super-U (another supermarket) is the most likely source. Dare we risk the journey given we may end up chickenless and horribly embarrassed by Super-U's possible lack of a loo. PB checks her mobile phone and discovers there is a toilet off the Super-U's entrance foyer. We drive over and I rush towards the welcoming door. Inside I read a crudely written notice: Pas de papier à cause du vol. I emerge ashen face and my nearest and dearest supply me with several packets of tissue which all sensible women carry instead of handkerchieves. I sing their praises to the skies.
at July 28, 2019 7 comments: 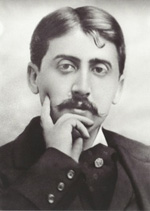 I swore I'd never force Proust on anyone, Proust should always be self-inflicted. Also there are pre-requisites. To finish A la Recherche du Temps Perdu a reader must incline towards France and Frenchness, including the bits that many foreigners find difficult. When Charles de Gaulle wrote "All my life I have had a certain idea of France." (Toute ma vie, je me suis fait une certaine idée de la France)" to kick off his Mémoires, it's advisable you have a clue as to what he was on about. For Proust demands that understanding.

On the other hand no one should ever turn away wilfully. Long sentences, paras, parentheses, yes. Complex but not obscure language, yes. Weirdos, yes. Subterranean analysis, yes. But... the Proust reader spends time, lots of it, in a four-dimensional universe and departs with memories as personal and vivid as any reality.

Why personal? Because Marcel tends to dig up stuff which can make you cry out in recognition. What would you expect from him? Tales of sexual whatnot? There are those. But how about a young child, vulnerable in his adoration of his mother, lying tearful in bed, fearing she may not kiss him good-night because there are guests and she may have other duties. How that endures. How the vulnerability nags at me.

I’ve read Kilmartin’s translation twice, perhaps three times. You can download the earlier Moncrief translation free, for a Kindle, as I have also done. During an idle half-hour recently I switched on for that evocative (and ambiguous) first sentence: “I went to bed early,” “I used to go to bed early,” or “I would go to bed early.” Reached the child’s sorrows and switched off. It’s not book you dip into.
at July 11, 2019 4 comments:

Email ThisBlogThis!Share to TwitterShare to FacebookShare to Pinterest
Labels: Novel 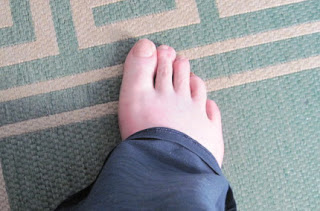 I'm frequently facetious; I find it helps. Had more people been facetious ("Inappropriately lacking seriousness in manner; flippant") towards El Trumpo  he might well have imploded. Convinced it was his nickname south of the Border.

In Spain they have a state lottery with a huge prize; they call it El Gordo (The Fat One). A fine caption for that photo when DT wore full soup-and-fish during dinner at Buckingham Palace.

Laughter can often be more effective than gloomy solemnity.

I'm starting with my toes. The fourth one along (on both feet) is hooked towards the big toe. Should that take capitals? Might Big Toe be another nickname for... No, that's enough about him.

Think of hooks and you think of fish. I once posted about people who dangle their feet into streams inviting fish to nibble away defective skin. I thought it was an admirable use of natural resources. Not many agreed. Misjudge facetiousness and it's egg on your face.

My feet are 10½ which is smallish given my height. VR's feet are a tiny 3. I occasionally wonder if I wore her feet whether I'd topple over, having lost much of my platform of stability (Thinks: I've never used that phrase. 'twould make a good post title.)

My big toe on the right suffers from gout. In my youth I didn't get on with my father and he had gout. It makes me wonder... Not a subject I discuss with my daughters, for obvious reasons.