Source of much talk 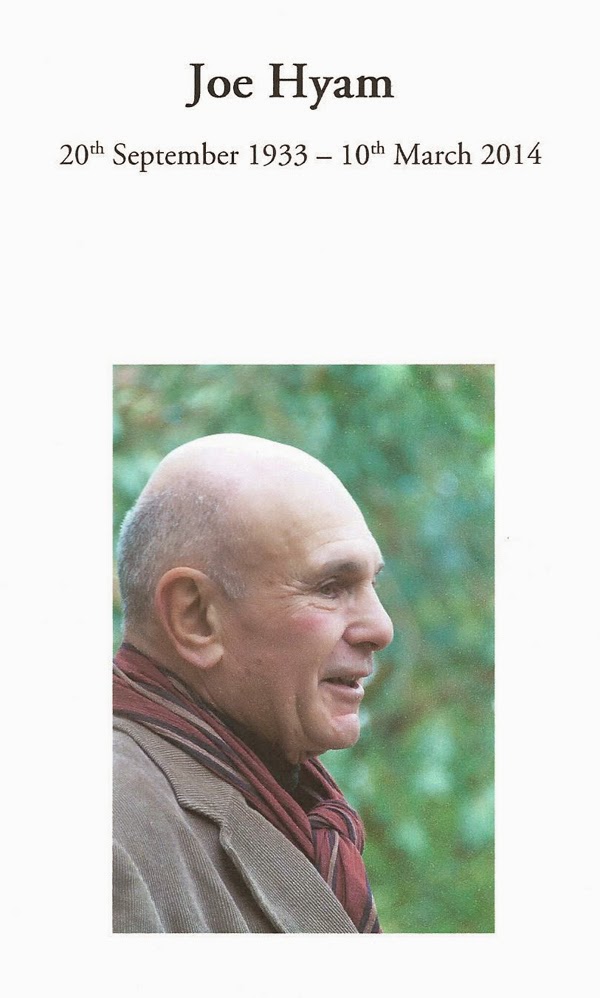 Technically we were mourners but a pox on that for a lugubrious word. So much animation with Joe invisibly providing the conversational springboard. Breathless, I  fancied that these eloquent, beautiful people were conspiring to re-create a Blogger's Retreat lunch as a group affair. Joe, you should have been alive for that

Filing into the chapel we were conscious of a dreadful sequence: Heidi gone in late December, Joe a bare ten weeks later. Two unforgettable individuals. But to have remained silent or to have whispered would have been a poverty-stricken reaction. As the pair of them had talked so did we. Forced to leave Heidi's funeral early, this time I sought her two daughters and was drawn into a discussion about how acts of creation may occur unplanned and unexpected on a canvas. H and J, both painters, listened I am sure.

Tunbridge Wells, that samovar of middle-class spirit, was applauded and condemned with equal vigour. A gorgeous young woman spoke of a travelling circus and seemed impossibly moved to discover that she and RR/VR had lived on the same street in central London. A neighbour who had chauffeured Joe to and from the supermarket spoke about his cargo with affection.

It seems invidious to name individuals but I must mention Joe's offspring. Both were admirably cast as poetry readers: Toby handling Roy Campbell's translation of Baudelaire's The Voyage (discovered for the occasion by Joe's brother, Ken), Pippa a sonnet by Joe (And yet, you must keep saying "and yet"...). Over dinner they reminisced about their tumultuous childhoods, causing us to laugh and to sorrow.

Nor can I ignore Lucy (needs no introduction) who left Brittany at a shockingly early hour, circulated in style among the Tunbridge Wells chat and was only brought low when I incautiously suggested she joined VR and me for a nightcap before turning in. Kay-legged with fatigue she may - or may not - have been briefly a little moist about the eyes as she talked yearningly about bed.

I spoke from the lectern about Joe. People were kind, even if I was dissastified. Trying to be modest (The leopard, always remember the leopard.) I listed myself as A Friend then realised this is a role that is awarded, it cannot be assumed. I worried too about literary contrivances, tricks that may have done duty as sincerity. I saw that "being a writer" is a subjective state and briefly wished I could have claimed to be a juggler to provide undeniably honest entertainment.

Fortunately as I resumed my seat a hand accommodated mine. But that won't save me from getting some stick about that juggling remark, revealed here for the first time.
By Roderick Robinson at March 29, 2014
Email ThisBlogThis!Share to TwitterShare to FacebookShare to Pinterest
Labels: Language