Look back in detail 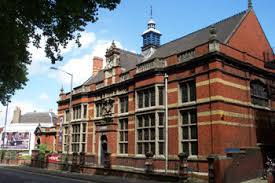 We were living briefly in W1, London's swankiest postal district, could shop at Selfridges if we'd had the money (I was paid £800 pa = $981.46) and could walk into the West End at night without the risk of being mugged. Work was half a dozen tube (ie, subway) stops away and I could just about afford the cost of a rail ticket to my home town, Bradford, which these days, costs £120 (= $147.22) one way, if bought on the day.

I doubt I bought more than two or three books a year (couldn't afford them) and we were both regular visitors to Marylebone Public Library (see pic), now pulled down. Amazingly we were able to eat out a couple of times a month, thanks to The Student's Guide to London.

We bought a TV later but only installed a phone when we returned from the USA in 1972. I was working on a couple of ramshackle magazines (Tape Recording Fortnightly, Stereo Sound), was made redundant and moved to a house magazine published by Wimpey, the building and civil engineering company - the first of  two low points in my life as a journalist.

VR was finishing her training at Charing Cross Hospital as a State Registered Nurse and I occasionally cooked for myself: a pound of fried sausages (speared and eaten from the fork) and "curry" (boil rice, add curry powder, stir).

Supermarkets had been launched but only in the outer suburbs. Grocery shopping in W1 was over the counter and some items had to be weighed and put into bags.

Privation didn’t matter. I was off the leash in one of the world’s greatest cities and finally had a girlfriend. On the whole my good luck has continued.
at October 02, 2019