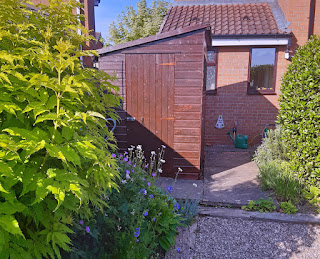 The gardener is no longer “the gardener”, he’s Martin, tough and competent. He agrees to re-stain the shed, last done by me over decade ago. He’s going to B&Q anyway and will buy the stain but feels he must warn me “It’ll be expensive.” I don’t ask how much. Hereford’s “expensive” is nowhere near what’s expensive in Kingston-upon-Thames, 12 miles from London, where we used to live. In Hereford people tip taxi-drivers in coins and not many of them.

Next job will be to rid the brick-laid driveway of weeds. I have a wire brush but the bristle constantly clogs with greenery. Martin’s brush has much longer bristles and he gives me a demo. An example of “Don’t work harder, work smarter.”

Also of the apopthegm, “Don’t bend if you don’t have to. In fact, don’t bend.”

GLADYS arrived at the concert hall a quarter of an hour earlier than scheduled but he was there before her. Wearing his new shortie overcoat even though the mild weather hardly warranted it. It was of course more a uniform than a form of  insulation…

As he bent to kiss her cheek he raised a hand to the side of his face, paused, then lowered it. A tic which had puzzled her until she’d accompanied him to his favoured suitings supplier and found him gazing yearningly at a shelf devoted to outdated clothing accessories: detachable shirt cuffs, foulards, sock supports and… hats. Three trilbies, one of which might have been a snap-brim fedora. And then she realised. Had men’s hats still been fashionable Arthur would have worn one. Since they weren’t he made do with a gesture that went with hats, raising a hand to sweep off the trilby preparatory to kissing a maiden.