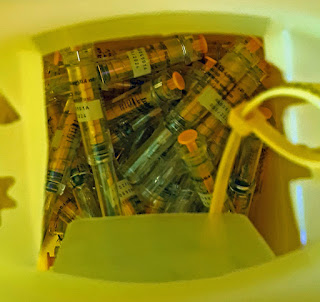 Yesterday I self-injected the anti-clotter for the last time. Twice a day for 28 days (I think), so there’s 56 used syringes in the yellow Sharps Box – reminiscent of the piles of dead wasps after we’d had the wasp-man in, a couple of years ago.

The routine was one injection at 08.00 hr and another at 20.00 hr. Alas, I was terribly forgetful and frequently late with the evening jab. Nor did I become any more skilful. I was supposed to pinch a fold of belly-skin and jab into the centre of the fold; but holding the fold steady was frequently beyond me.

There were times when the jab was completely sensation-free, not just pain-free. This occurred in perhaps 30% of the total and I think must be attributable to the thin-ness of the needle. Even when there was pain it was minimal. Despite this there were always worries before-hand. Why?

Perhaps because pain consists of two quite separate experiences: anticipation and the actual rending of the flesh. Theoretically the anticipation should be pain-free but it’s as if the sensors in the flesh start pre-reacting as the source of the pain draws near.

Certainly this was the case when I broke my wrist roller-skating. My mother filled me with analgesics and was then able to handle my wrist quite robustly. A few hours later I couldn’t bear her hand less than 6 inches away from my arm. What I felt through this “gap” may not have been pain but it was genuinely unbearable.

I walk round the block twice a day to encourage my bowels to do what bowels do. The elapsed time has dropped from 15 minutes to 10. These walks have the desired effect but incipient gentility prevents me from saying what this is.

By Roderick Robinson at January 19, 2022
Email ThisBlogThis!Share to TwitterShare to FacebookShare to Pinterest